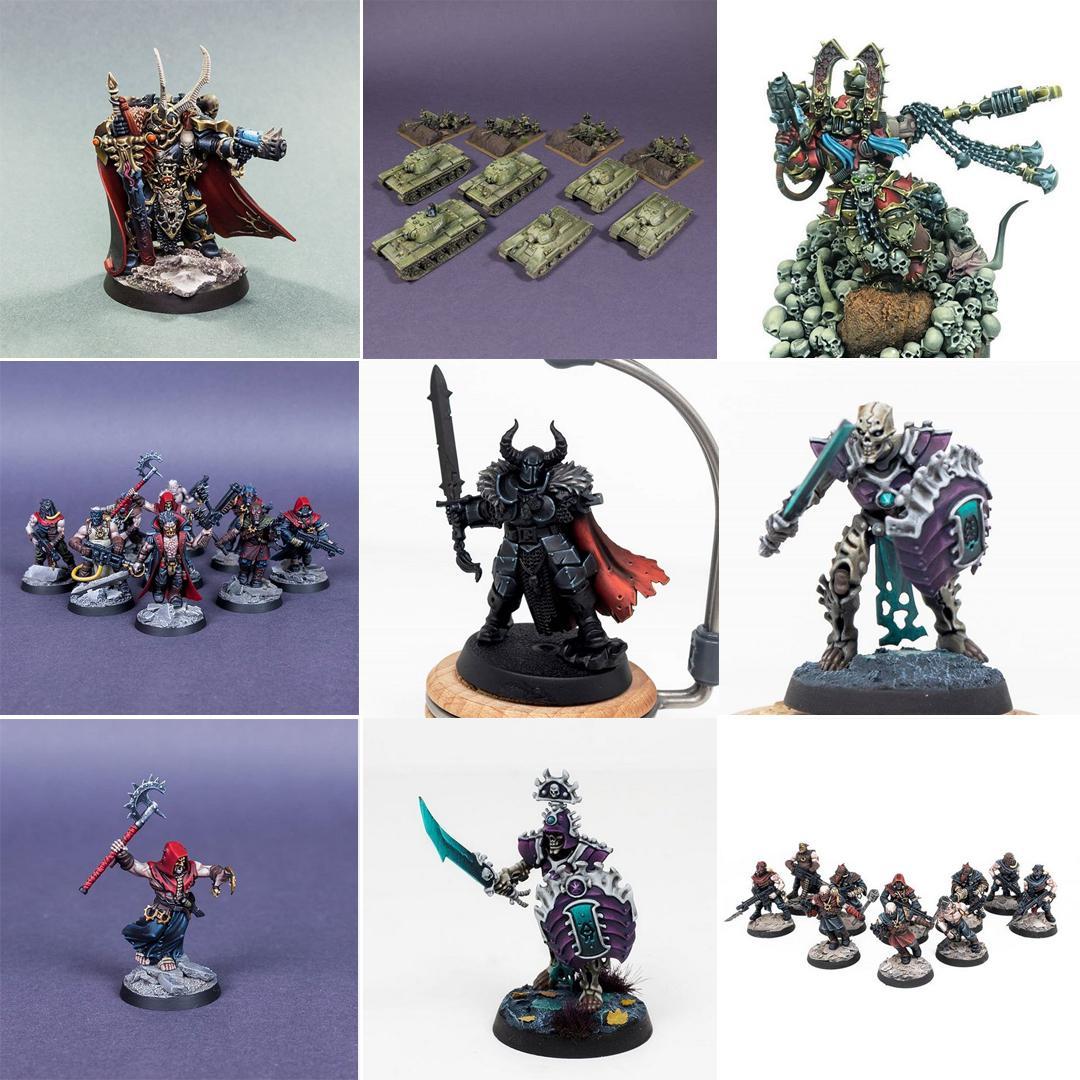 Happy New Year to everyone.
Yes I posted nothing in 2019 on this blog but I will change that in 2020. I painted a lot in 2019 but almost no Flames of War stuff. In 2018 I went back to Warhammer and get fully into it in 2019. So I painted a lot of these miniatures and improving my skill on bigger miniatures. In this post I will make a little recap.
My Loonking will make the start. My first 28 mm miniature I painted in decades: 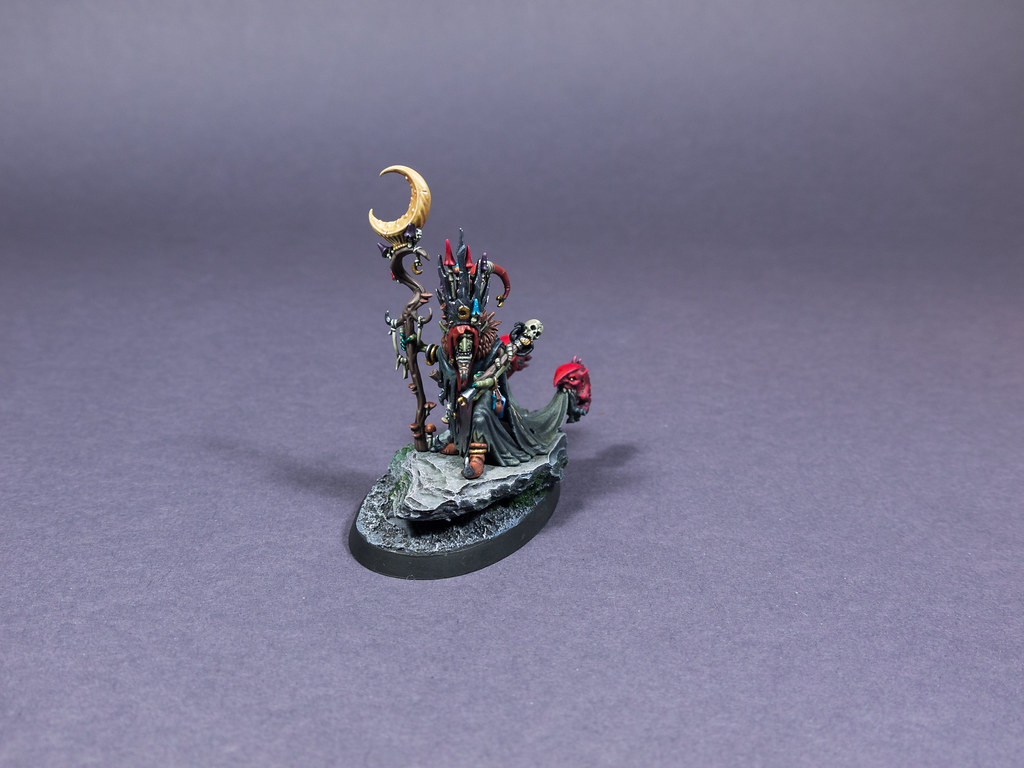 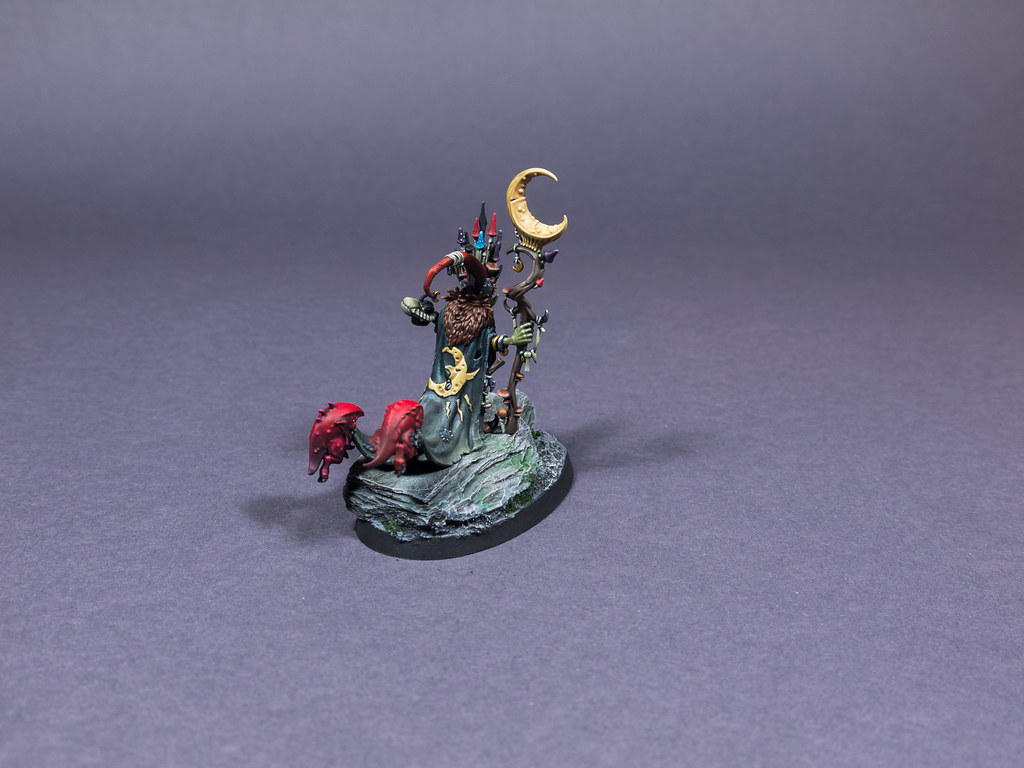 Then I finished the Russian Mid War Starter Set. I already saw a few pictures on this blog or somewhere else on the internet. 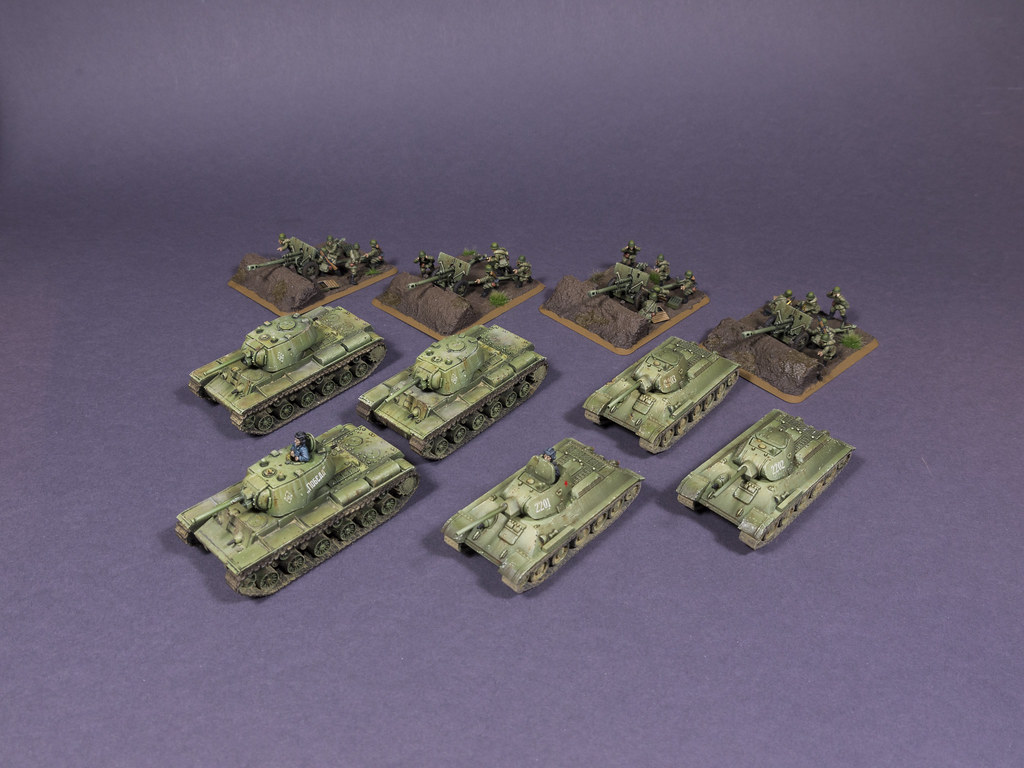 I still want so finish the rest of my Russian army or start with my Mid War Germans but I am unable to do that, because of all the projects I have going on. After that I went back to Warhammer. This time Warhammer 40.000 and I painted the Chaoslord from the Dark Vengeance boxset which is a great sculpt. It was also my first serious try on NMM. 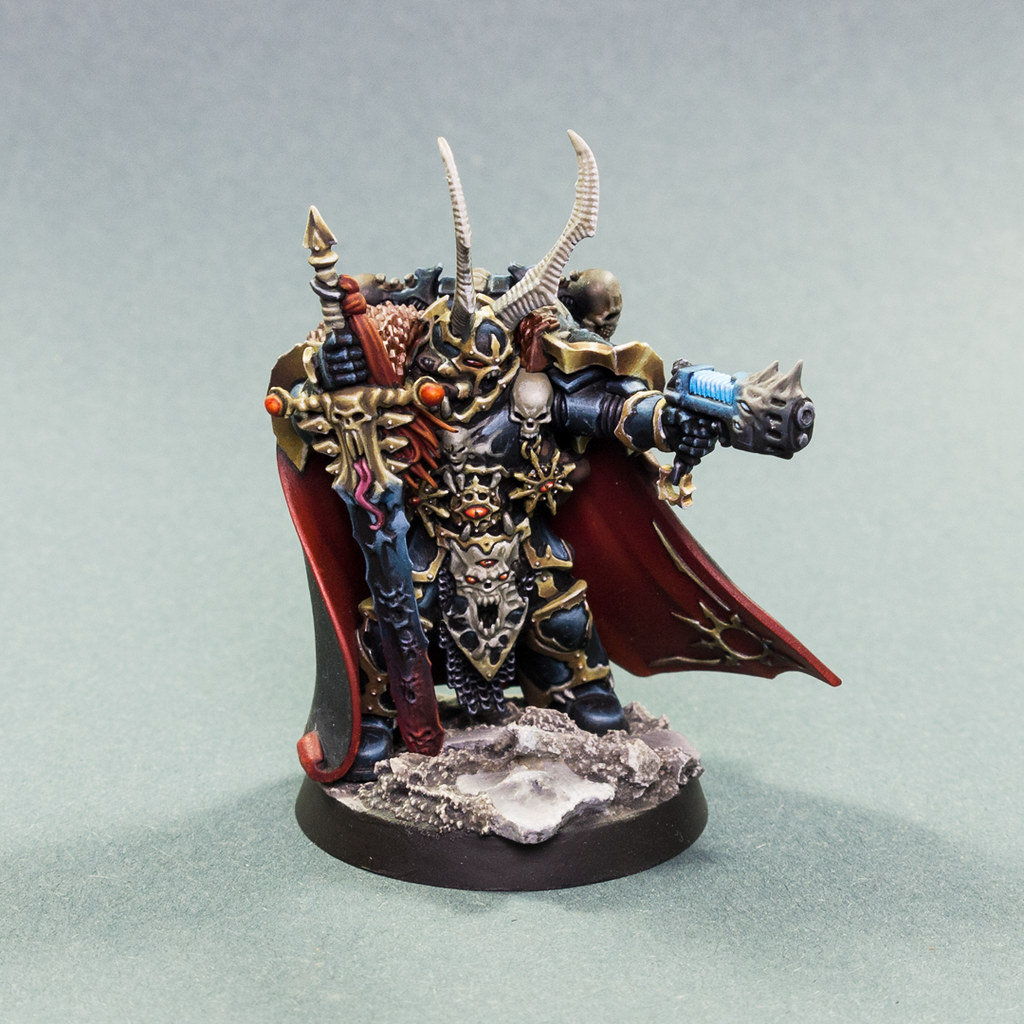 Followed by some Ultramarine Reivers. It is quite funny to see that I paint a lot if vanilla themes nowadays. I hated Ultramarines when I was a kid but know I think they are awesome. Dark Angels are still an option or Imperial Fists. 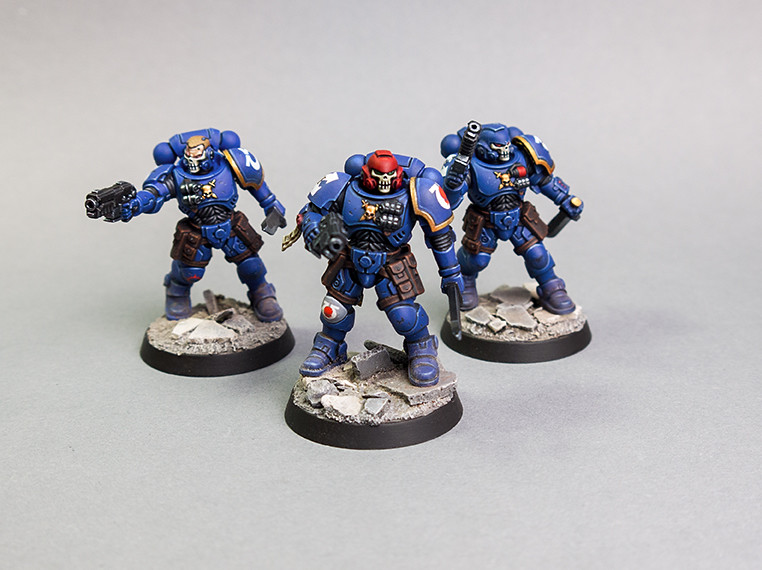 Usually I try to do the “not so much fun” things first and decided to start with the first half of the Chaos Cultists. The sculpts are good but you can see that they are a little bit older and push fit miniatures. They tend to lack some details and the gaps are horrible sometimes. 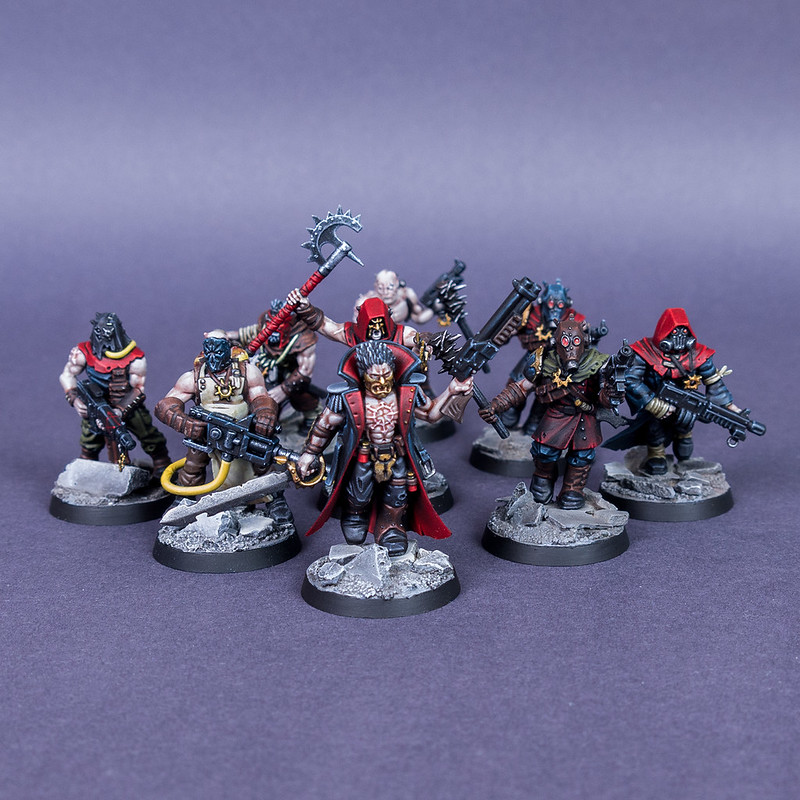 Then Everchosen was announced and I wanted to take part in that painting competition. My only goal was to win the local competition in my Warhammer store. For that I let the internet decide what I shall paint for that and they voted for Kharn the Betrayer. I spend a lot of time on him and I am still very proud on the result I achieved. 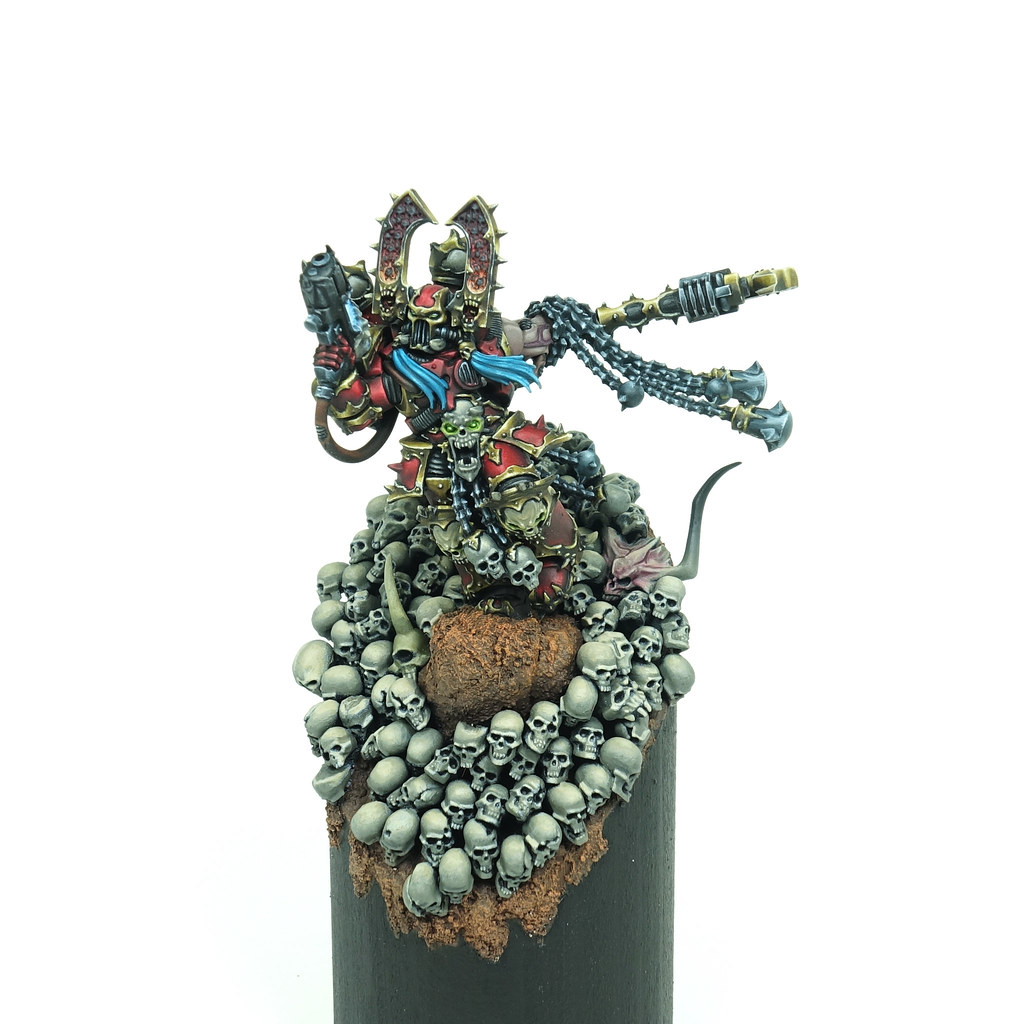 I won the local voting but did not make it to Top 100. So my goal for 2020 is to make it to the top 100 which is hard because it is a public voting but we will see.
After that I wanted to paint something more simple, less time consuming and I finished the rest of the cultists. Simultaneously I painted the Hellbrute of the Dark Vengeance box. The paint job is okay and you can only see it in the back of a group shot below. 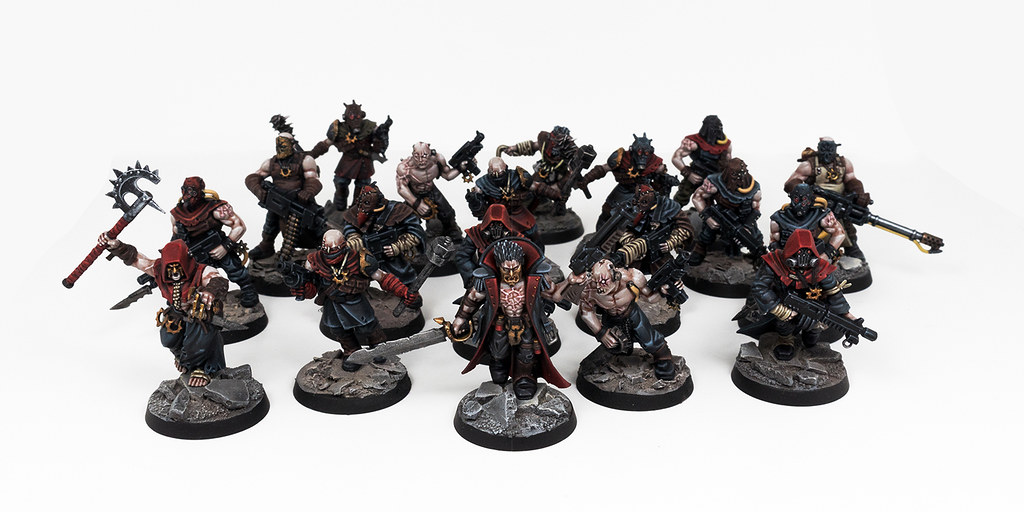 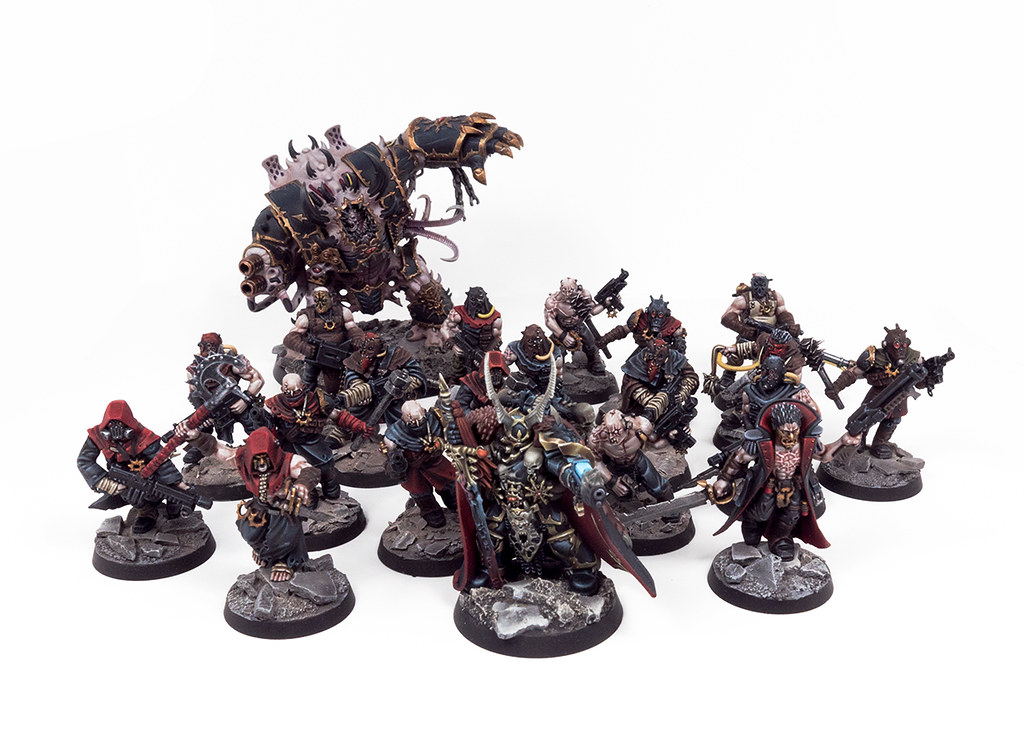 Games Workshop released the Ossiarch Bonereapers at the end of the year and after some scepticism I was hooked and started this new army. It was immediately clear that those bone boys need somthing purple, beacause it is the perfect color for undead armies. So here is my first test Bonereaper. 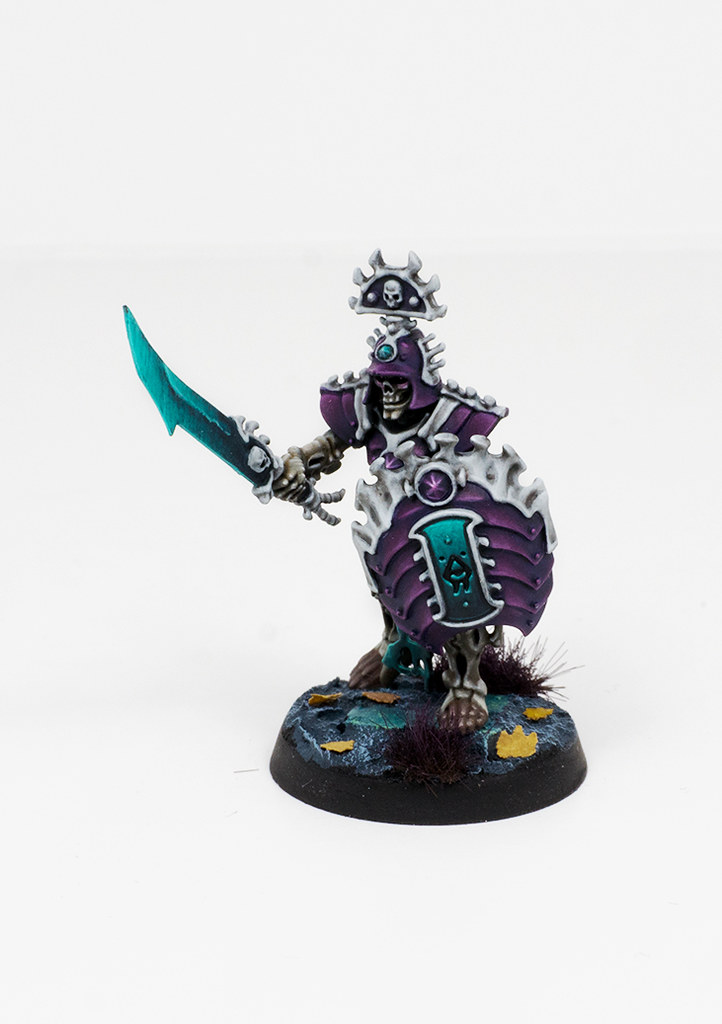 I had a lot of fun to paint that guy but sometimes you have to finish other projects first. There were still some Chosen Chaos Space Marines on my table and I had to paint those. 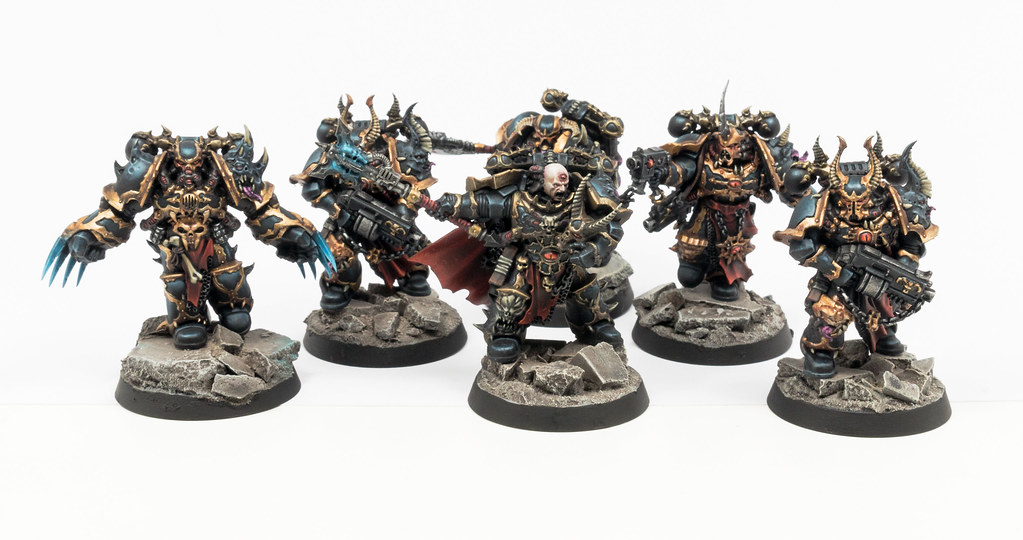 To be honest, there is still one left but they took so much time that I had to stop. I am happy that they turned out quite good although they are quite half assed. After that I had the great plan to stream my painting sessions and it took some time to get everything together for that project and I stopped painting for a short period of time.
In december I started streaming (twitch.tv/lackmetal) and I finished another bonereaper. 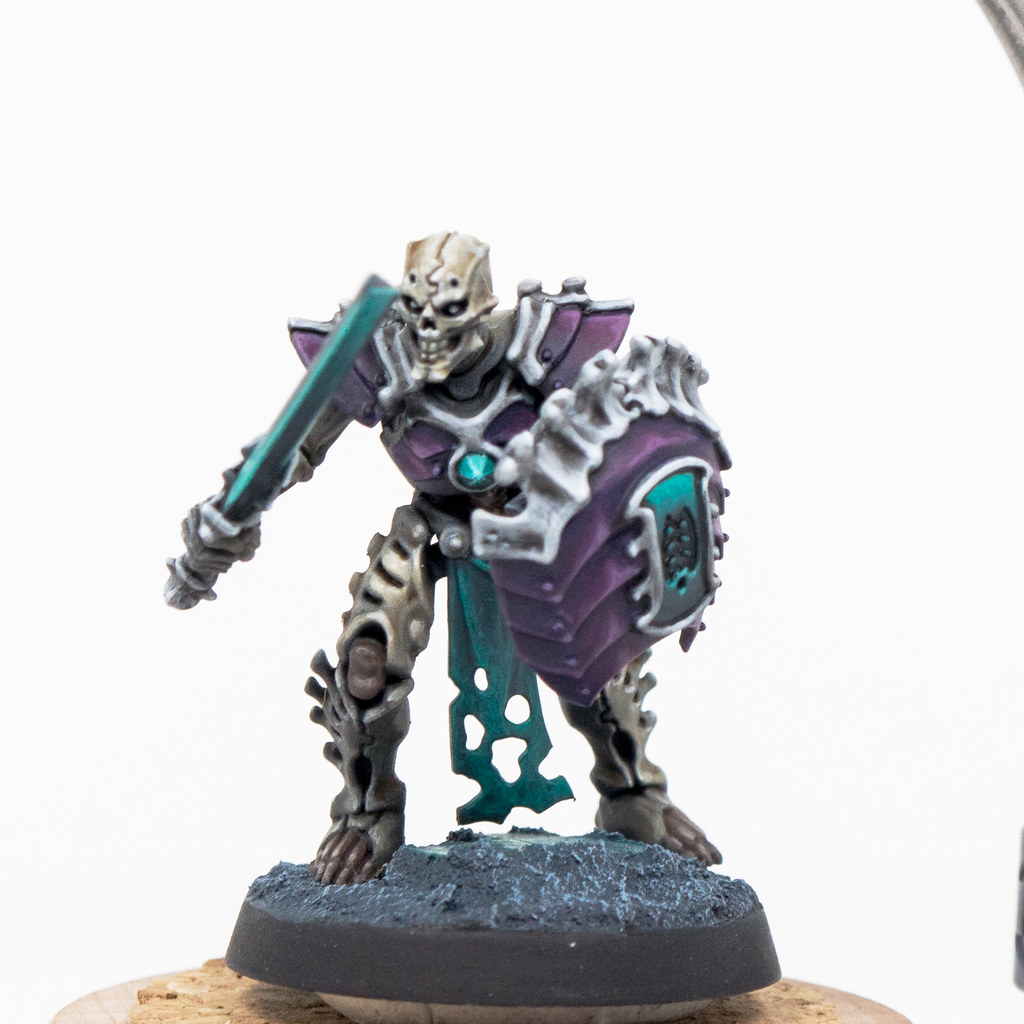 I get easily excited and when the new Slaves to Darkness Start Collectin Box was released I bought it immediately. The next painting project for Twitch was a Chaos Warrior which is still WIP. 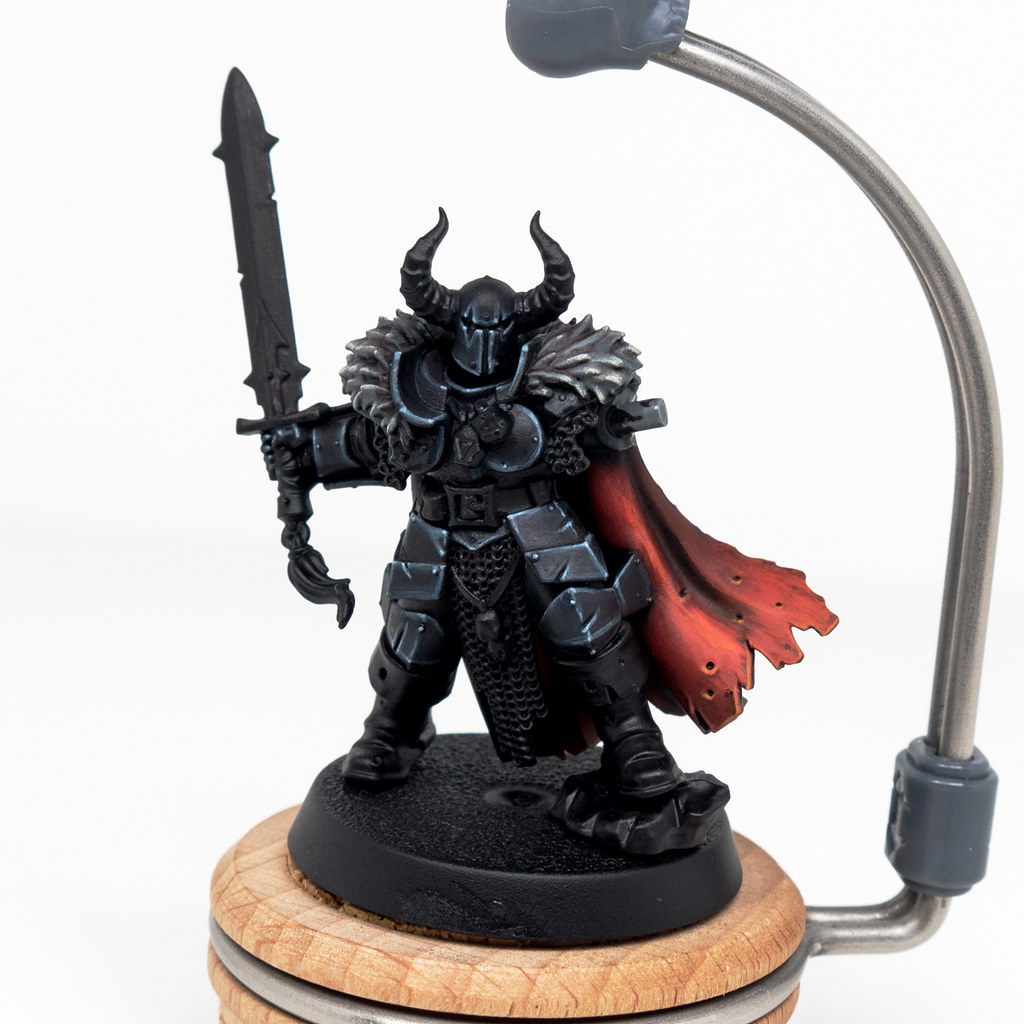 I also started my next display piece – Typhus Herald of the plague Lord. I want finish him in mid february, but I guess I wont make it, because I am very slow and very unsure on that project. 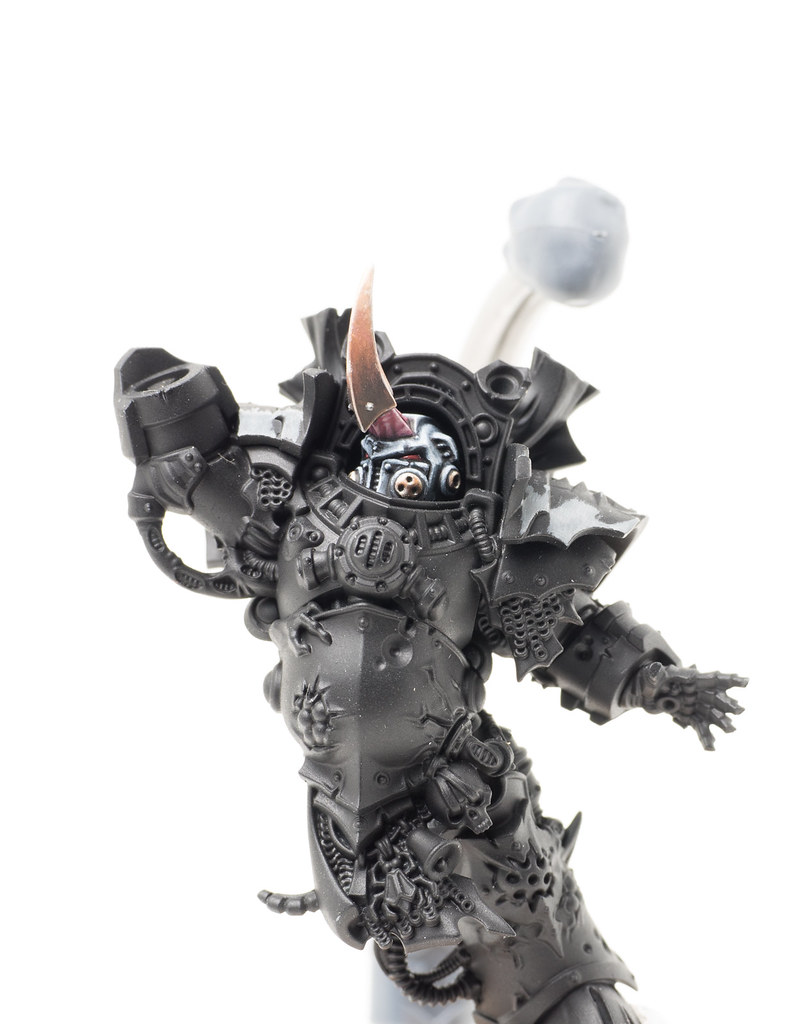 Kharn was way more easy… But I will keep you updated on that project here.
So I recommend to check back for more Bonereapers, Chaos Warriors, Typhus and Gloomspite Gitz, which I will start in the next few days. I will also prepare a little backstory for those guys and all my other competition projects will be around Gloomspite Gitz (more or less). I want to put them into Armies on Parade and the Everchosen Contest.

Skip back to main navigation